The Sea Ranch was designed to respond to – and live in harmony with – the natural elements. The history of The Sea Ranch dates back to long before the project’s inception, where this stretch of coastline was long, wild and untouched due to its challenging elements, only seasonally visited by the native Pomo people who gathered shellfish and kelp from the shoreline. In the late 1800s, early settlers stayed for the timber harvest and eventually developed a sheep ranch.

In 1964, when Oceanic Properties, Inc. decided to build a new town, Al Boeke, architect and Vice President for Community Planning, was sent to California from his Hawaiian headquarters to find the right site. Boeke fell in love with the barren and grand Rancho Del Mar owned by Ed Ohlson and his family. He recommended Oceanic purchase the entire ranch property.

To give tangible, visible form to the principle of harmony between inhabitants and nature, Boeke assembled a stellar group of architects and design professionals. Lawrence Halprin, landscape architect, studied the topography, weather and vegetation that inspired the original master plan. His vision was based largely on the historical and ecological community.

The iconic Sea Ranch Lodge is one of the oldest buildings at The Sea Ranch. It was designed to serve a central role as a cultural hub for the community, housing a post office, land sales office, and information center for new visitors. After serving its initial purpose, it was expanded into a hotel, and, through the changing of hands over the years, it eventually lost its original soul. 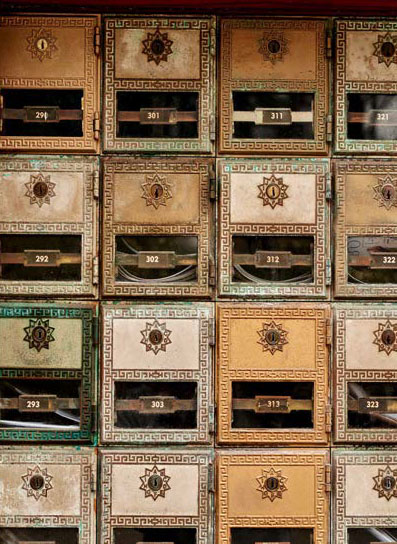 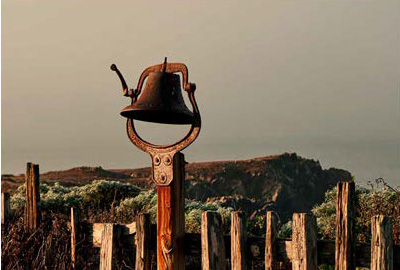 The first recorded visitors to this land now known as The Sea Ranch were the Pomo Indians, who were hunters and fishermen. They made seasonal trips to the coast to gather kelp and shellfish. Settlement proceeded slowly. Access by land and sea was difficult, and navigation was hazardous. In 1846, Ernest Rufus, a naturalized Mexican citizen, received a land grant of five Spanish leagues, stretching south from the Gualala River to Ocean Cove. Called the "Rancho de Hermann" and later simply German Rancho, it was one of the last Mexican land grants because California broke away from Mexico three months later.

The previous year, Rufus had invited another German, Frederick Hugel, to the land he had selected. Hugel built a cabin on the hill above the present Equestrian Facility, fenced in grassland, and built a warehouse near the bluff from which he planned to ship and receive cargo. He raised cattle and horses, and planted fruit trees, potatoes, green peas, and other vegetables. German immigrants William Benitz and Charles Meyer Farming continued farming after Hugel. In 1855, William Bihler and Charles Wagner bought the northern 2 1/2 leagues of the rancho and imported livestock to improve the local stock. By 1857, Bihler had bought out his partner.

Adam Knipp and Bihler’s nephew, Christian Stengel, who had sailed to California in 1858, managed Bihler’s livestock operation. Beginning in the 1860s, they gradually bought the 3,220-acre ranch from Bihler. Between 1872 and 1882, Robert Rutherford bought a 985-acre section south of the Gualala River from Bihler and 13 years later lost it to bank foreclosure.

The Knipp-Stengel operation flourished. In the early 1880s, the partners built the landmark Sea Ranch barn that is now in the National Register of Historical Buildings. In 1903, Knipp and Stengel began selling off their land to Bender Brothers Mill and Lumber Co., which also acquired the Rutherford ranch.

The Bender Brothers built the Del Mar Mill on Del Mar Point (which burned in 1910), and a store, saloon, warehouse, and the Del Mar School along the existing county road. The school still stands at the southwest corner of Leeward and Deer Trail.

Starting in 1910, Walter P. Frick bought fragments of the ranch and unified them as the Del Mar Ranch. Ranching continued under Frick’s ownership; however, he never lived at the ranch full time but maintained a summer cottage on the site of the present Del Mar Community Center. He leased the ranch to a group of Russian immigrants. It was Frick who had the hedgerows planted as windbreaks, beginning in 1916, and who replaced the cattle with sheep.

Frick died in 1937, and the ranch and sheep were auctioned off in 1941 for back taxes. Margaret Ohlson and her four sons purchased both for $125,000, and the Ohlson family held it for 23 years. The Ed Ohlson house (which is part of the Del Mar Community Center) and the former home of brother Elmer Ohlson (which is near the Knipp-Stengel barn) were built during the 1950s. 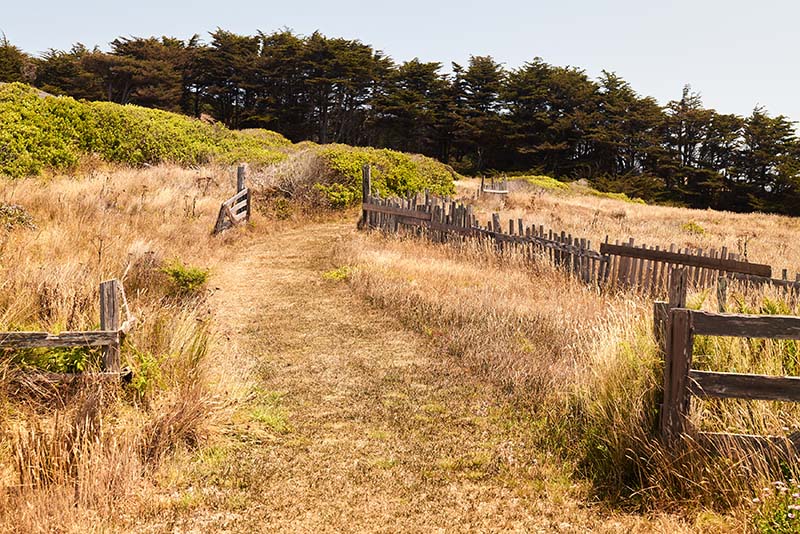 For prototype buildings at The Sea Ranch, Oceanic hired the architectural firm of Moore, Lyndon, Turnbull and Whitaker to design Condominium One along the bluffs and architect Joseph Esherick to design a cluster of houses nestled in a hedgerow. In 1964, the original designers evolved a concept of dynamic conservation of ‘living lightly on the land’ which starts with respect for nature. Each landscape element should be recognized and nurtured, reinforcing natural forms and scale. The specific site provides the identity, establishing a ‘territorial partnership’ with any structure placed within it, not upon it. Building materials should be drawn from nature: rough and simple.

A covenant would enforce stewardship of natural resources through an owners’ association of residents who felt an instinctive relationship with the environment. The challenge was demonstrating that people can inhabit a beautiful and fragile land located along a wild stretch of California coast without destroying it. Adherence to their original architectural and design concepts resulted in the evolution of an ‘intentional community,’ one that is unique to the California coast, if not the world. It is the willingness of The Sea Ranch community, past and present, to engage informed planning for its future, and to instill in its membership an enduring commitment to environmental stewardship and community service. 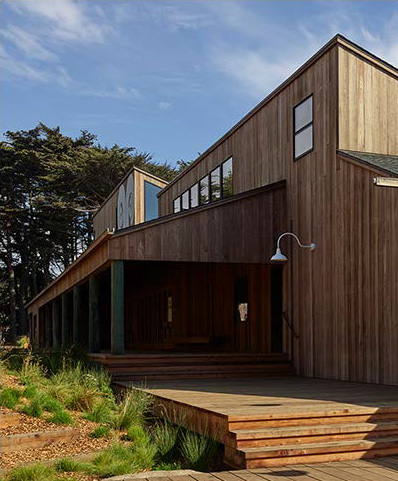 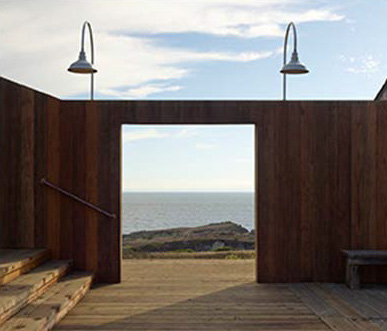 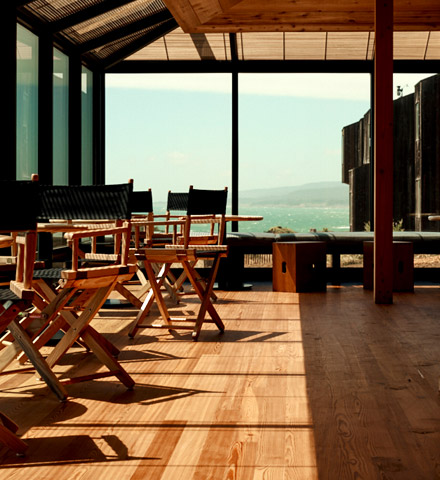 The Sea Ranch Lodge Team is continuously exploring ways to limit our environmental impact, and our long-term goal is to create the most sustainable and closed-loop program locally possible.  We are taking quick steps toward this goal, such as recycling our used cooking oil into biodiesel, in partnership with SeQuential Biodiesel.  Our next steps are a bit more involved, but very exciting.

The first project focuses on a grass-fed beef and lamb program, combined with a land restoration project.  We are leasing land just South of The Sea Ranch and will be using a combination of cattle and sheep to remove and control invasive vegetation, such as pampas grass, on some overgrown fields.  We have a herd of sheep mowing the edges of the property now, and then our fencing installation will begin.

Our permanent livestock will move in once our fencing and watering systems are complete, and then we will begin the real work of farming, which is converting solar energy into plants and animals, who then convert that energy (plus inputs from the atmosphere) into a soils-based carbon sink, all operating in a sustainable and low input loop.

Our next project is still in the planning phase. For this venture, we will be taking the food scraps generated by the Lodge restaurant, along with wood chips generated by tree services operating on The Sea Ranch and turning them into a rich compost.  This compost will then be utilized in several greenhouses that we will be using to grow greens and fruiting vegetables to serve at the Lodge.

We will provide updates here as these programs come online, and we can’t wait to see the locally produced foodstuffs incorporated into our farm to table menus. 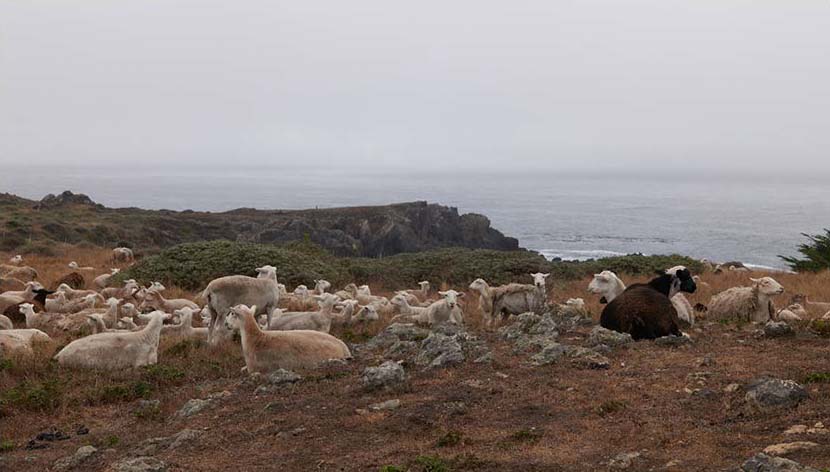